Some find AI technology overwhelming whilst others are embracing it. Can humans really coexist with robots?

Should we be concerned? Are robots and AI technology set to take over the world? To put it simply, no. But by 2028, robots will likely make up a large percentage of our workforce. Companies could be run by a single employee with a workforce of robots who can work all day, every day, with no concerns about robots rights or wellbeing.

It may seem like something from a sci-fi film, but we are not actually that far away from this reality.

In fact, it has been estimated that 44 per cent of jobs in the UK economy could feasibly be automated. That means 13.7 million people could be replaced by a robot. Northern Ireland is one of the regions predicted to be most at risk.

Automation already plays a large role in our everyday lives – from our mobile phones to online banking and smart home assistants like Amazon’s Alexa, a raft of processes and everyday tasks are being made easier, more efficient and more interlinked than ever before.

Robotic technology is quietly transforming a number of the world’s key industries too, not least the world of food and drink manufacturing.

A recent study suggests nine out of 10 food processing and packaging companies are already using robotics and predicts that the falling cost of collaborative robots will drive further adoption companies seek to eliminate down time and improve reliability of product quality.

And consulting firm Accenture recently predicted that companies in the UK food and drink sector could unlock as much as £56 billion in value over the next decade by taking advantage of digital technologies such as robotics and real-time data analysis.

If this all sounds a bit futuristic, consider this. In October, a Californian company called Zume Pizza, raised $48m of funding to expand its automated pizza business. Zume’s robots make 372 pizzas an hour, each one ordered via a mobile app. Zume robots are five times faster than humans.

A robotic workforce brings accuracy, efficiency and a continuous production line. On paper, robots may appear better than humans but the cost of purchasing, running and maintaining such high-tech equipment could prove a major stumbling block for many companies.

Those who do embrace automation open the door to creating new jobs for engineers and IT technicians. There will always be a need to repair machines, production lines and automated systems.

There’s no denying the huge opportunities that exist within the food industry for automation, particularly within the primary packaging processes. Consideration needs to be given to the types of robotics implemented and the materials used to make them, especially when health and safety issues arise over, for example, the handling of different types of food.

Robots and Humans Working in Harmony

As robotics and AI technology become more sophisticated, experts anticipate their adoption in the food and beverage industry will only grow. Robotics applications will stretch from harvesting, processing, primary and secondary packaging, to grocery order fulfilment.

Eventually, we could see a world where robots will work side-by-side with humans, helping them do their jobs better. By combining machine learning with robots that can handle various materials, humans will be able to train robots how to handle a variety of objects, while AI will help increase the food industry’s efficiency and public safety.

In computer science AI research is defined as the study of ‘intelligent agents’: any device that perceives its environment and takes actions that maximise its chance of successfully achieving its goals. The term ‘artificial intelligence’ is applied when a machine mimics ‘cognitive’ functions that humans associate with other human minds, such as ‘learning’ and ‘problem solving’. Source: Wikipedia 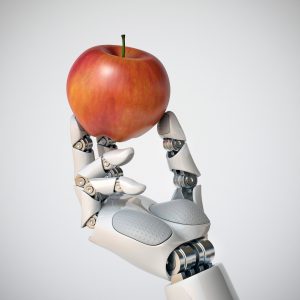