A global leader in linerless labelling, label verification, and pack inspection systems, Ravenwood Packaging is expanding its footprint in Asia Pacific. The opening of a new office in Australia has boosted its local presence and ability to service FMCG end-users, including major retailers.

Founded in 2004, the privately owned Ravenwood, with headquarters based in the UK, continues to expand across the globe. Mostly notable is the significant growth across the Asia Pacific Region. This surge has not come without its challenges though.

Let’s look at Ravenwood’s linerless success story and how the company has conquered against all odds.

It was back in the early 2000s, when Ravenwood attempted to penetrate the APAC region by appointing its very first Australian linerless label converter and machinery distributor. The partnership proved to be a slow burner with only two linerless applicators being sold on average per annum. Moreover, as the company explains, complications and setbacks were constantly encountered in the factory environment, due to the previous distributor refusing to supply linerless labels to specification. (Ravenwood refers to this process as the ‘Circle of Linerless’ – more on this later.)

As a result, substandard and cheaper material alternatives were sourced by this distributor while operating under the name of ‘Ravenwood’. Subsequently, these inferior labels were the cause of prolonged periods of factory downtime, and poorly labelled packs on supermarket shelves. And worst of all, Ravenwood was being blamed for these failures.

Fast forward to 2018, and Ravenwood dissolved its distributorship and went in search of new partners. Since this time, Ravenwood has secured partnerships with the supply of Com500 Coaters to four new linerless printers. The current line-up includes Hally Labels in Brisbane, TMA in Melbourne, TMA in New Zealand and Label Force in Western Australia. In addition to its printer partners, three new machinery distributors have been appointed for the supply of its Nobac 5000 applicators and VXR / Vision Pack Inspection Systems. Ravenwood welcomed Linco, based in New South Wales and Result Group in Victoria, with SPM NZ Ltd, located in New Zealand being the latest to join the team.

In 2020, Ravenwood felt it was a pivotal time to set up a dedicated Asia Pacific office in Sydney, due to increased supply and demand. During the same year, Sam Aloschi was appointed Asia Pacific managing director. Previously, he was head of site for Retail Ready Operations in the Coles Group.

Since Aloschi’s appointment, business operations have continued to flourish, most notably in the chilled protein and ready meal markets.

T3 Engineering has also been brought on board to offer servicing, parts supply and machinery support to the APAC distributor and printer network.

In summary, within the space of just four years, Ravenwood has appointed four new linerless printers and three new machinery distributors across the APAC region. Moreover, the company says faith in the Ravenwood brand has been restored, including the confidence of its customer base.

What is the Circle of Linerless?

Ravenwood has been providing retailers and packers with linerless labels since 2004. The company says the tried and tested formula provides a fail-safe process to produce consistent labels across a global scale. Subsequently, the process safeguards brand owners, food packers and consumers. With strict standards and guidelines in force, Ravenwood’s linerless labels will remain consistent throughout the entire production and application process, before reaching food retail outlets.

“Once appointed, all Ravenwood printers and machinery distributors become members of the Circle of Linerless,” APAC MD Sam Aloschi explains. “Each is briefed fully as to the entire process. The basics are quite simple. To begin with, all members must purchase Ravenwood machinery only for the production and application of linerless labels.

“Secondly, no cutting corners for sourcing cheaper material alternatives. Only Ravenwood approved materials can be used,” he says.  “Simply put, following these two main rules means that Ravenwood and its distributor network can guarantee quality, consistency and faultless linerless labels.”

Aloschi notes that Ravenwood’s network is all too aware that by using non-approved materials, the client’s operation can be severely disrupted.

“For the best label substrates, adhesives, and silicones, we have sourced and developed a vast selection from multiple industry leading raw material suppliers,” he adds.

“This network of support ensures minimal disruption to the supply chain and allows the end user continuous operation, while guaranteeing unrivalled performance of the label in the factory. No other linerless label provider currently offers this level of service. And from an environmental perspective, it’s good to know that all materials are sustainably sourced and tested for quality control,” he says.

When the unexpected happens, Ravenwood also guarantees full disaster recovery for all machinery out in the field. This also applies to events such as fire, floods, natural disasters, and pandemics. Where label production is concerned, multiple partners use common key lines, die lines, artwork, and equipment to provide during breakdowns.

“This support ensures business continuity for minimal disruption,” Aloschi says. “When such an outage occurs, Ravenwood can assist the customer fully with our educated and connected approach. Our Engineers are on call 24/7.”

The final stage of the process Ravenwood calls the ‘Preloved Programme’. The programme undertakes machinery work from complete set up to full rebuild, as well as refurbishments and conversions on Ravenwood’s range of linerless applicators and coaters.

“A Ravenwood machine is for life which also means a lifetime of free software upgrades,” Aloschi adds.

Aloschi says that as organisations are now beginning to embark on their Net Zero 2050 journeys, Ravenwood can assist retailers in reaching this goal.

“Not only does linerless offer a sustainable alternative to traditional self-adhesive labels due to the absence of the label liner, but Ravenwood also generates minimal C02 during machinery build,” he adds, noting that all machines are UK built, including the Nobac 5000, Com500 and VXR. The Circle of Linerless enables Ravenwood to keep its carbon footprint low.

With over 20 years of linerless experience and a range of labelling solutions to help increase production efficiency, Ravenwood can tackle almost any packaging type and challenge: from fish and meat to fresh fruits and vegetables including plant-based, dairy, ready meals and bakery products.

Aloschi says he looks forward to continuing to build the company’s presence in the APAC region, and partnering with distributors and end-users to deliver sustainable labelling solutions. 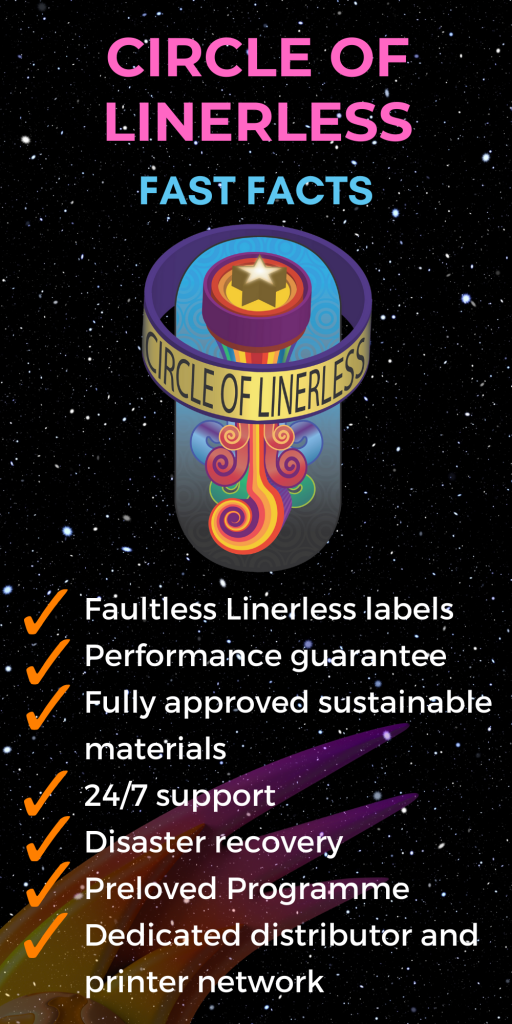