Online Enquiry
Home > News > When Biodegradable Plastic does not Biodegrade

When Biodegradable Plastic does not Biodegrade

Biodegradable plastics were first introduced in the 1980s and are made from renewable raw materials and petrochemicals containing biodegradable additives which enhance biodegradation. Many people think terms like ‘bioplastic’, ‘biodegradable’, and ‘compostable’ mean the same thing. But there’s a huge difference between ‘biodegradable’ plastic (essentially taking decades or centuries to break down) and a totally  ‘compostable’ material (something that turns into harmless waste after composting in the correct environment).

Confusing jargon hampers our general understanding. We are led to believe that ‘biodegradable’ breaks down faster and is the more sustainable choice in terms of plastic as a material. Research has raised questions about biodegradable products being marketed to shoppers as alternatives to non-recyclable plastic. The question is, is biodegradable plastic, ‘biodegradable’? And to what extent?

Biodegradable plastic is claimed to pose less of a risk to wildlife and the environment. Yet a study carried out by PhD student, Imogen Napper and Professor Richard Thompson at the University of Plymouth has revealed that biodegradable plastic bags were still very much intact after a three year period. Some of these bags were as strong as the day they were produced, still able to hold 2kg of shopping.

Their research involved testing ‘compostable’, ‘biodegradable’, ‘oxo-biodegradable’ and ‘polythene’ plastic bags in three environments. 1. Exposed to the air and sunlight, 2. Buried in the ground and 3. Submerged at sea. After the three year period, none of the bags had broken down and ironically, the biodegradable bag was completely intact. The scientists at Plymouth question how effective biodegradable materials are as a long-term solution to the problem of single-use plastics.

Much of our single use plastic ends up in the ocean where the water is usually too cold to break down, so they either float forever on the surface (just like conventional plastics) or, if they do break down, produce tiny plastic fragments that are harmful to marine life and humanity.

The only way to completely break down biodegradable plastic is via an industrial composting plant. These facilities provide the necessary conditions for balance of moisture, air and microorganisms to efficiently compost plastics. Heat is also required to temperatures ranging 50/60C. Biodegradable plastic will not simply break down in the ground, in a compost heap at home, or indeed, in the ocean.

Our oceans and sea life are literally suffocating in plastic. The spread of everything from large plastic debris such as fishing gear which dolphins can become entangled with, to fragments smaller than 5mm in diameter known as microplastics, is having profound ecological effects.

The only true solution to plastic pollution is to remove the material completely and to find a reusable option. Or alternatively, create a material that really does degrade within the realms of our planet’s natural environments. 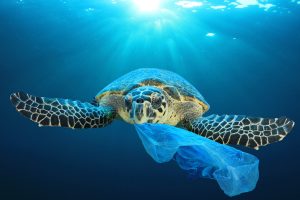