Online Enquiry
Home > News > Plastic, Paper or Reusable: What is the most Sustainable Shopping Bag?

Plastic, Paper or Reusable: What is the most Sustainable Shopping Bag?

If this was a competition for outlining a clear winner, it would be classed as a ‘Non Zero Sum Game’.

Across the globe, consumers go through billions of plastic bags each year. In an effort to reduce the number of bags being used once and then thrown away, many supermarkets now encourage the purchase of the ‘bag for life’. The term ‘bag for life’ unfortunately, is not how many see this more robust bag as they are rarely reused and are often discarded after a two uses. And that’s bad news for the planet, as a plastic bag takes 500 years or more to break down in landfill. The good news is though, this type of bag could now begin to be phased out in the UK. Morrisons has said it will remove all plastic carrier bags from its stores over the next year. The supermarket chain will switch from offering plastic ‘bags for life’ to a paper alternative. Is this the more sustainable option when compared to plastic or reusable bags? It would appear so, but we decided to delve further and study the pros and cons for identifying the most sustainable shopping bag. Did we find a ‘winner’? Science tells us that there is not a clear answer.

Plastic bags were invented to save the planet, according to the son of Swedish engineer, Sten Gustaf Thulin, who created them in 1959. The bags were developed as an alternative to paper, to avoid cutting down our forests.

Plastic is a by-product of oil refinery and a major advantage is that when comparing to other types of shopping bags, producing them carries the lowest environmental impact. Although production of these bags uses petroleum (amongst other toxic substances), it results in less carbon emissions, waste, and harmful by-products when comparing to cotton or paper bag production. Plastic bags are also much more durable and subsequently, reusable. Many studies into different types of bags, show us that plastic production requires less resources if we assume plastic bags are used at least twice. So normally the lifecycle of a bag means its first use is for carrying our shopping home and then secondly, for collecting rubbish. Then popped into the bin, destined for landfill.

Although plastic bags are recyclable, very few people recycle them. Fortunately, recycling programmes for plastic bags is becoming a more widespread option. In the UK, some councils are beginning to collect carrier bags as part of household recycling schemes. Although the majority of larger UK supermarkets now offer recycling facilities at the larger of its supermarkets: Asda, Morrisons, Sainsbury’s, Tesco’s, The Co-op and Waitrose have all opted into the scheme.

So unless we recycle plastic bags they are either destined for landfill or become litter. When plastic bags are not landfilled, the impacts to the environment can be even more excessive, especially if they end up in our oceans. The most visible and disturbing impacts of marine plastics is the ingestion, suffocation and entanglement of sea creatures. According to Surfers Against Sewage, we have reached a global tipping point. Twelve million tonnes of plastic are pouring into the ocean every year. Plastic has been found in the deepest parts of the ocean, as far away as the Antarctic and strewn globally across our beaches.

As mentioned, plastic can take over 500 years to break down. During this time, the plastic, like most materials will start to form into smaller particles and then eventually, microscopic pieces. Scientists refer to this as microplastics. Microplastics have been found nearly everywhere: in marine animals, farmland soil, rivers, drinking water and even in the placentas of unborn babies. We do not yet know the full implications of microplastics ingested by animals and humans, and of course the environment. Long term, if we do not take significant action, the effects will continue to build up over time with potentially irreversible effects.

Paper production, from managed forests, does have some advantages over plastic when it comes to sustainability. Paper is much easier to recycle and when landfilled, it will take between 2 to 6 weeks to break down. Paper will also decompose even more rapidly when composted. However, according to the Northern Ireland Assembly, paper production is intensive with the manufacturing process requiring four times as much energy compared to plastic bag production. And also, surprisingly, many more chemicals and fertilisers are used in producing paper bags. Resulting in additional harm to the environment.

Studies have shown that, for a paper bag to counteract its environmental impact compared to plastic, it would need to be used between three and 43 times. Since paper bags are the least durable of all the bagging options, it is unlikely that a person would get enough use out of any one bag to combat the environmental impact.

Even so, the fact that paper is recyclable, does help lessen its impact. The Confederation of Paper Industries reports that Recovered paper (used paper) is the most important raw material for the UK paper and board industry. Recycled paper represented over 70% of the fibre used to manufacture paper and board in the UK alone, in 2019. This equates to 3.1 million tonnes of paper and cardboard products being collected. Subsequently, with reuse, paper fibres become shorter and weaker each time the recycling process takes place, there is a limit to how many times paper can be recycled.

These bags have to be the most sustainable shopping bag? The kindest to the planet? You would think so, wouldn’t you? But the stats are broad and are based on the materials used. Reusable bags vary greatly and are made from many different materials. And the environmental impact of producing these materials also varies on a large scale. There are many different materials but let’s look at a couple, starting off with cotton.

According to the UK Environment Agency, cotton bags have to be reused 131 times before they reduce their impact on climate change, to the same extent as plastic bags. To have a comparable environmental footprint to plastic bags, a cotton bag potentially has to be used thousands of times. Materials other than cotton, however, perform much better in measuring sustainability. For instance, nonwoven polypropylene (PP) which is another popular option. PP is made from a more durable kind of plastic, these bags need to be reused around eleven times to break even with the impact of conventional plastic. So this material has a lesser impact than cotton.

In addition to varying widely in their eco-friendliness and regardless of the material used to produce them, many reusable bags go unused. This is because many consumers forget to bring the bags with them to the store. People end up paying for thinner plastic carrier bags or a ‘bag for life’. The most obvious reason for using reusable bags is that their use cuts down on the amount of litter on land and in the ocean for reasons we have highlighted under ‘Plastic Bags’.

So what’s the verdict? What is the most sustainable shopping bag?

As you can see, there is not a definitive answer. Our findings can prove that both reusable and paper bags generate a significant environmental cost upfront with paper being able to rapidly breakdown in the environment. Plastic bag production generates less CO2 but creates greater negative impacts after being used. Subsequently, it is hard to determine which type of bag is the most sustainable shopping bag.

We do not just accumulate or use bags for grocery shopping. Any trip to the high street will mostly result in us coming home with a shopping bag of some kind. We think that it is best to use whatever you have until it breaks or wears out, and to then recycle or dispose of it in a responsible manner.

If we had to state a ‘winner’ in this ‘Non Zero Sum Game’, then reusable bags have to be the way forward. The materials and production processes just need refining for reduced CO2. And as consumers, we need educating further.

At Ravenwood, we are passionate about the environment. In 2020, our linerless labels prevented 12.1 million KG of CO2 entering the atmosphere. 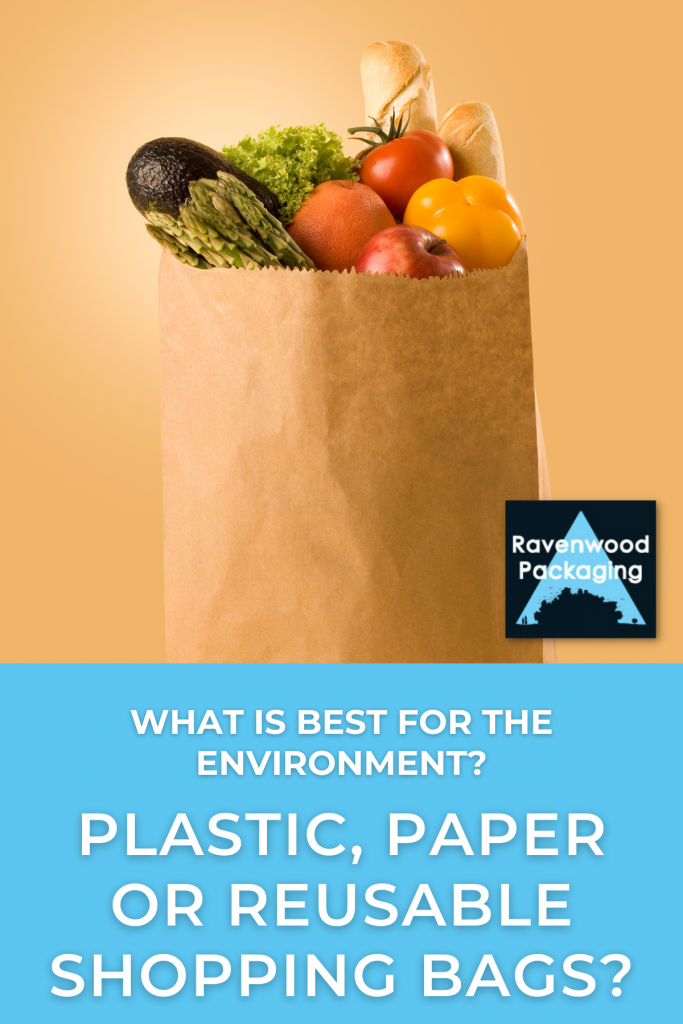