In the same year, Ravenwood produced 5 billion labels worldwide, thus saving 82 million m2 of label liner going to landfill or incineration. This figure is set to increase exponentially as Ravenwood’s printer and distributor network continues to grow on an annual basis.

We were interested to read that a leading paper convertor has launched a label liner recycling programme in Europe. The convertor claims that Europe consumed 470 kilotons of label liner in 2019, with just over a third recycled (source: Labels and Labeling). That’s a huge amount of liner and this was generated by Europe alone. According to the convertor, recycling 1 kilogram of liner, avoids the emission of 2.28 kilograms of carbon dioxide.

Based on this calculation and to summarise, two thirds of 470 kilotons equates to 313 kilotons. This means a devastating 313 kilotons of liner went to landfill or was incinerated in 2019. When converting to kilograms of carbon dioxide, if these organisations had adopted linerless, this would have alleviated 713,640,000 kilograms of CO2 being released into the atmosphere.

The convertor aims to recycle 75 percent of the label waste that they bring to the European market by 2025. Although, invariably, recycling comes at a cost, both financially but also for the environment. The commercial incineration of label liner allows the recovery of the energy, but this must be offset with the cost of transporting the liner from the printers, and then back to the incineration facility. Sadly, many companies will avoid these costs and continue to landfill their waste. This will undoubtedly continue until legislation prevents this.

We understand that there is a need for a circular economy, and this works very well for certain materials. Ravenwood supports recycling and reuse whole heartedly. PP and PET are good examples and we are seeing that these materials are becoming a ‘feedstock’ rather than waste. The question is, why create a label liner recycling programme for a material that really has no place in society? Label liner is a by-product and can be eradicated completely. Food brands and producers can avoid the need for label liner recycling programmes, incineration, landfill and other initiatives. And by doing so, avoid associated costs and the detrimental effects to the planet. The solution is linerless.

More and more businesses are now switching to linerless in a bid for carbon neutrality and sustainability. Ravenwood was founded in 2004 and is considered a world class leader in linerless labelling. Linerless labels do not feature a release liner. By eliminating the liner carries many benefits, including zero liner to landfill, disposal costs and a much-reduced carbon footprint. Linerless is overall, a more environmentally friendly and sustainable process of labelling. To find out more, contact Natalie Bell +44(0)1284 749144. 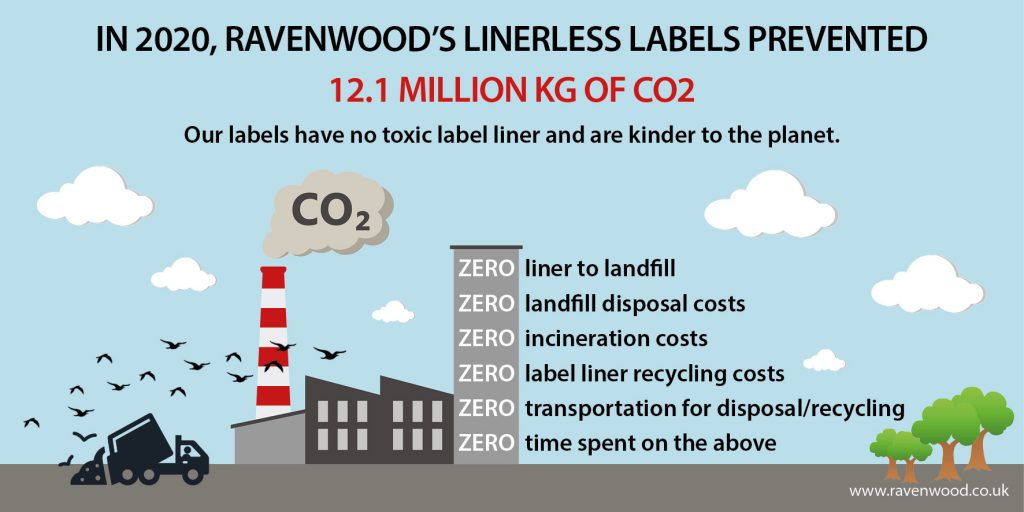